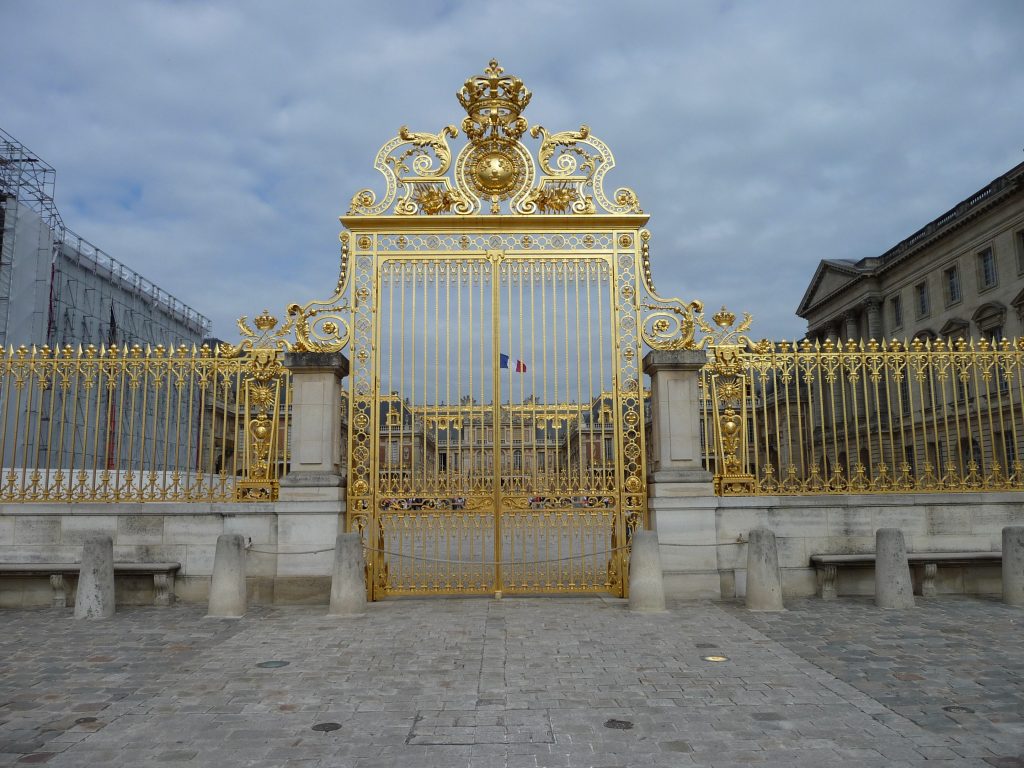 The golden main gate at Versailles is closed to the aristocratic ways of the 18th century, but the side entrances welcome you inside this marvelous estate.

What used to be a several-hour carriage ride from Paris is now just a short train trip, and it’s one that everyone should take. Many people think of Versailles as the lavish palace and the reason for the French Revolution in 1789; but it’s more than that, which is why you should schedule it in your next Parisian adventure. For more information about Versailles, visit its website (http://en.chateauversailles.fr/homepage).

Getting out to Versailles is really pretty easy. Take a look at your Metro map and find the most direct route to any RER “C” train connection. For more information about the trains, visit the train system website (http://parisbytrain.com/rer-c-train-map/). Go the Metro station and buy a round-trip ticket to Versailles-Château that covers both the Metro rides and the train rides. Remember that you want the train that takes you to Versailles-Château, and NOT the one that goes to Versailles-Chantiers! When you get to the train station (the end of the line), just follow the crowd — you can’t get lost! 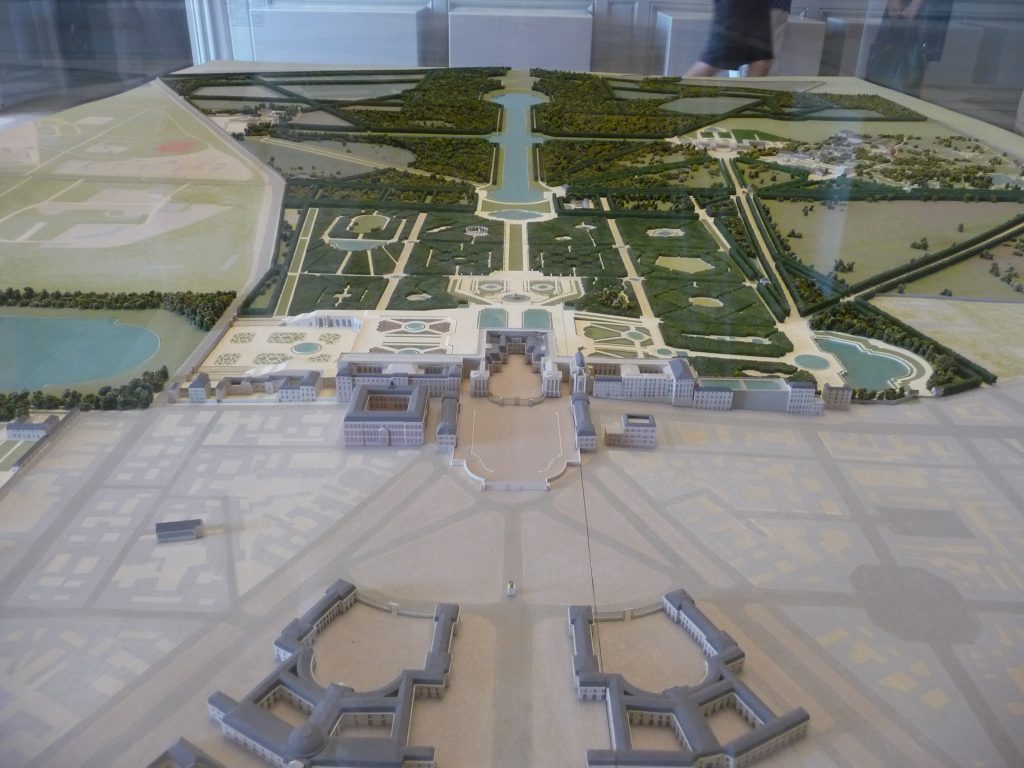 The model of Versailles shows the grand scale of the estate that was the envy of all European rulers.

There are some important logistical details to remember when heading out to Versailles.

Unlike other palaces and castles around the world, your visit to Versailles should be built around an entire day. There are fewer crowds in the morning (along with its reduced admission for entrance before 9:45), and that allows you ample time to wander throughout the main Château at your leisure. You’ll want to roam from floor to floor, room to room to room before the tour groups and larger crowds arrive. 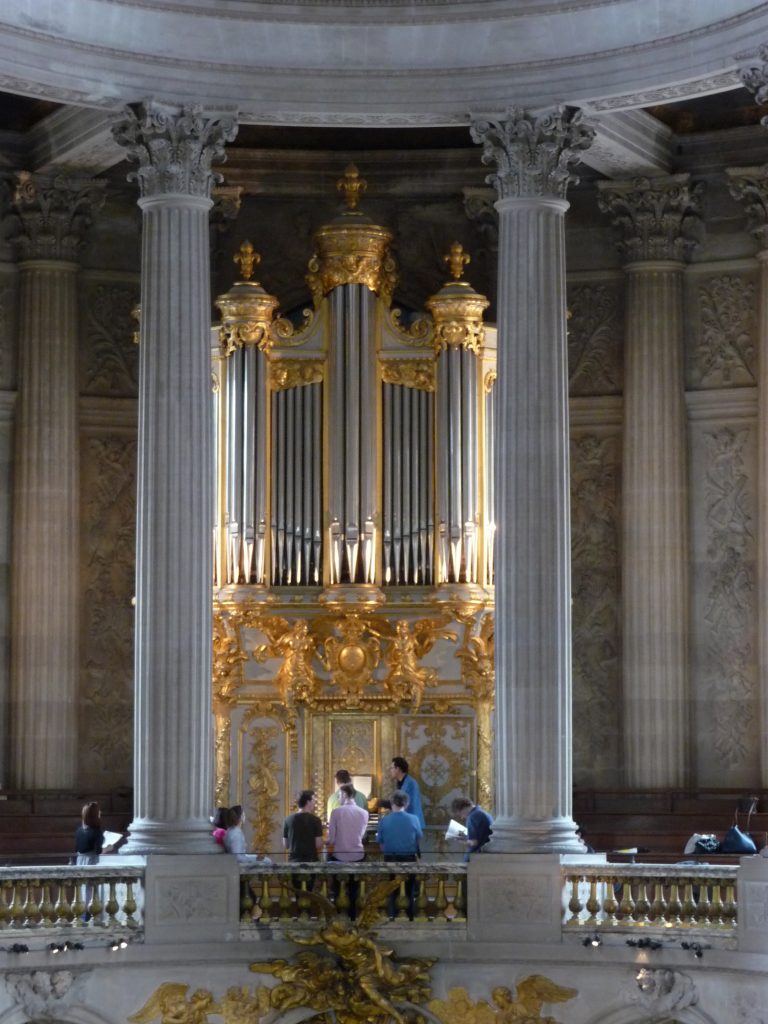 The magnificent pipe in organ in the two-story chapel is framed by massive columns that are more evidence of the palatial scale of the main Château.

The best entrance is on the east side of the courtyard where you’ll see the Hercules Drawing Rooms and the Chapel. If you’re fortunate, you might be able to hear the organist playing the pipe organ in the Chapel where the King’s visitors came to worship, and it was usually to worship him. As you weave your way in and out of each room and hallway, you’re bound to be in awe of the magnificence of each area and the way that the rooms are able to take advantage of sunlight and views to the outside. 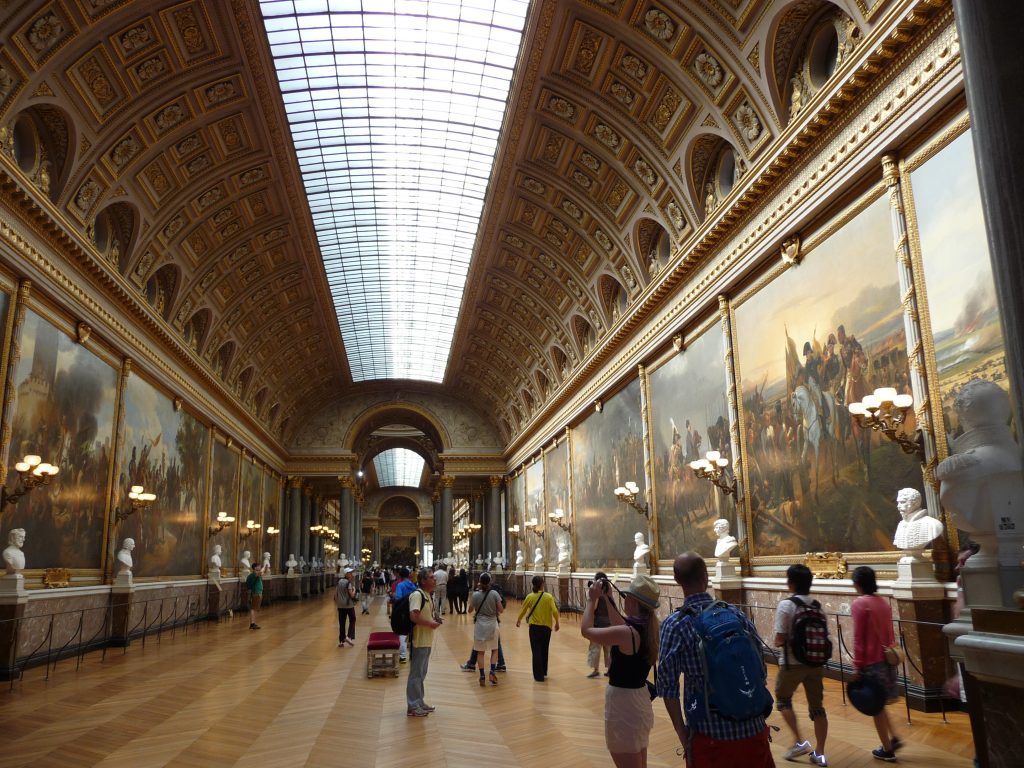 The Hall of Battles is filled with light from above that accentuates the busts of heroes and the enormous paintings of decisive battles.

The one constant as you make your way through the Château is the ceiling height. Higher ceilings naturally evoke a grander feeling, even if the rooms weren’t already large. But it’s the high ceilings that allow for the large paintings, multiple levels of windows, and the grand visual experience of looking through a long series of arched doorways.

One surprising feature of the main Château is the size of the King’s Bedchamber. It appears to be one of the smallest rooms although it was centered right on the palace axis, and it had a marvelous view right out onto the Marble Courtyard. I don’t believe that the King spent a lot of time in his “bedroom” looking out to see who was coming to visit (he usually knew anyway), but the design was done to represent that the King was “at the center” of everything. 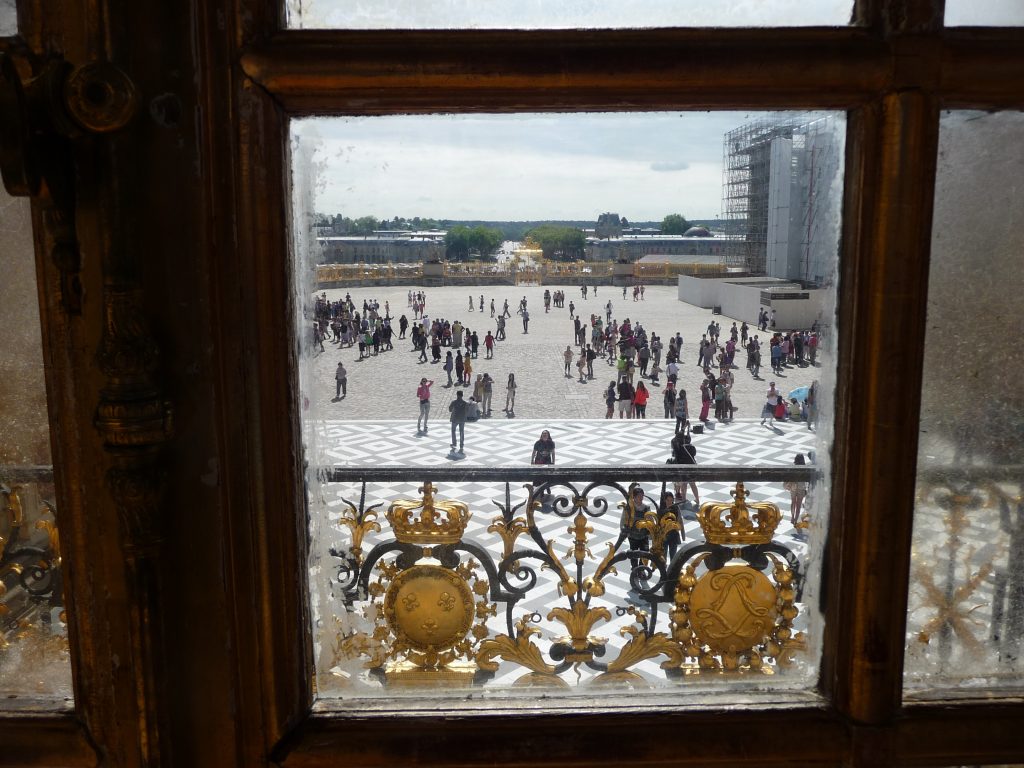 The view out of the King’s Bedchamber was right out onto the central Marble Courtyard.

Although you could spend an entire day absorbing the beauty, the grandeur, and the history inside the main Château, it would be a loss if you didn’t go out to the gardens and groves. Remember when I said that Tuesday crowds were typically quite large compared to the other days? I didn’t give you the entire reason up front.

Each Spring, from April to mid-May, and then from July through October, the groves of the Versailles Château come alive with energetic classical music. Called “The Musical Gardens,” the piped music plays from morning till early evening as do the water displays in the Mirror Fountain. The music’s not in every grove, but when you walk from one fountain or grove to another, and there are twenty-eight of them, you’ll enjoy being surprised when the music comes alive. 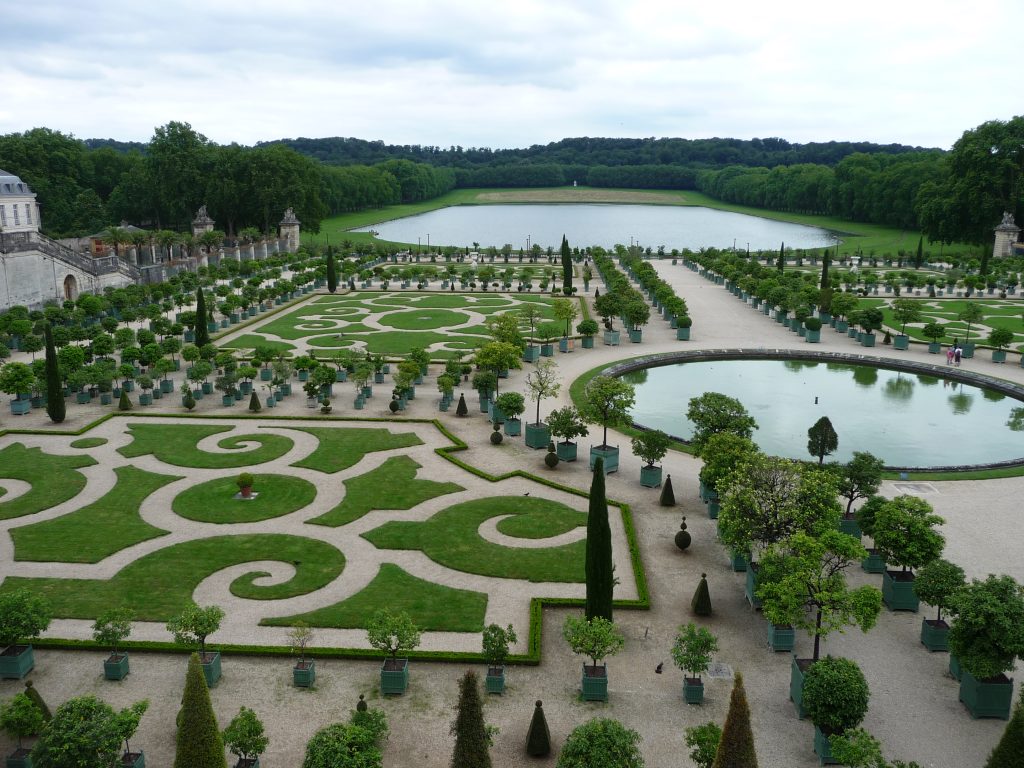 Geometrical patterns adorn The Orangerie where plants are stored and trees are stored during the winter.

The Mirror Fountain is especially delightful as the water fountains are timed to frolic and dance along with the music. There is plenty of grass for seating, and the rhythmic beats bring smiles to all those around the 300-year old fountain. Not to miss out on marketing opportunities, the Château de Versailles sells a CD of the music that’s played, and there’s a new CD each year — how’s that for marketing genius!

The expanse of the groves and fountains covers so much more area than the main château, and you’ll definitely get in your walking steps as you go from one area to another. It’s a little deceptive as you walk through the groves as you move away from the château; there is a slight downhill incline that you don’t notice until you’re ready to head back — back uphill. 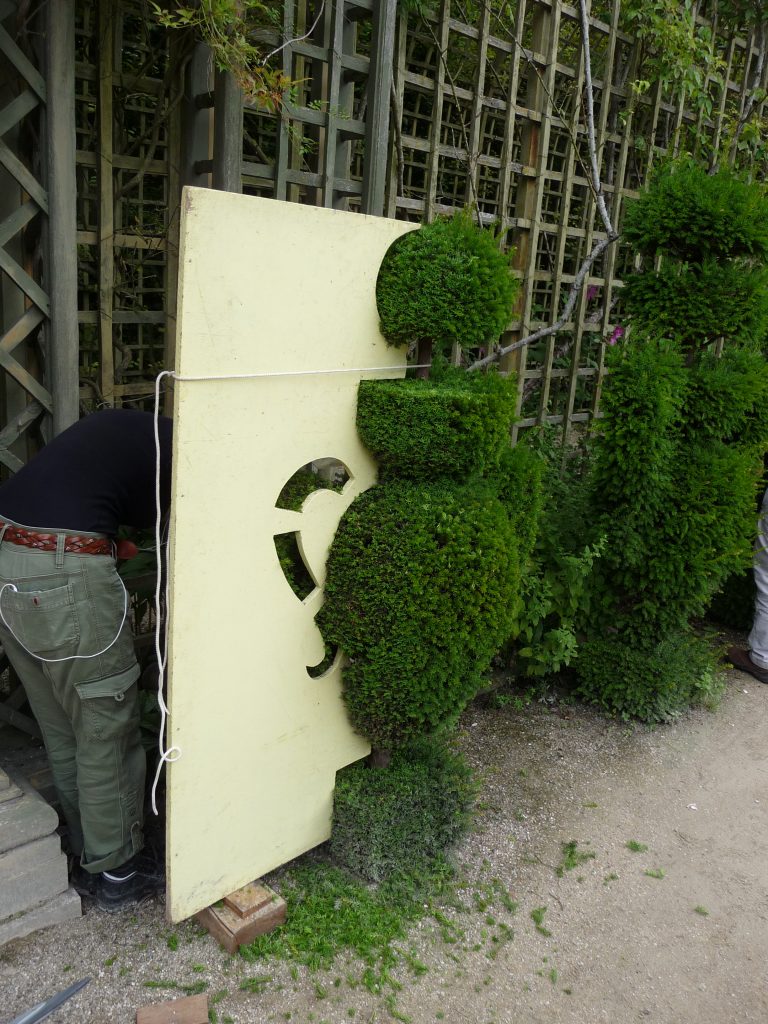 Gardeners use wooden cutouts to precisely trim the bushes into geometrical shapes.

Shapes are abundant, whether they’re whimsical or plain ornamental. Framed cut-outs are used to ensure consistency in the decorative bushes, and the “faces” in the fountains aren’t readily apparent at first glance. But once you see one of them, they all come into focus. 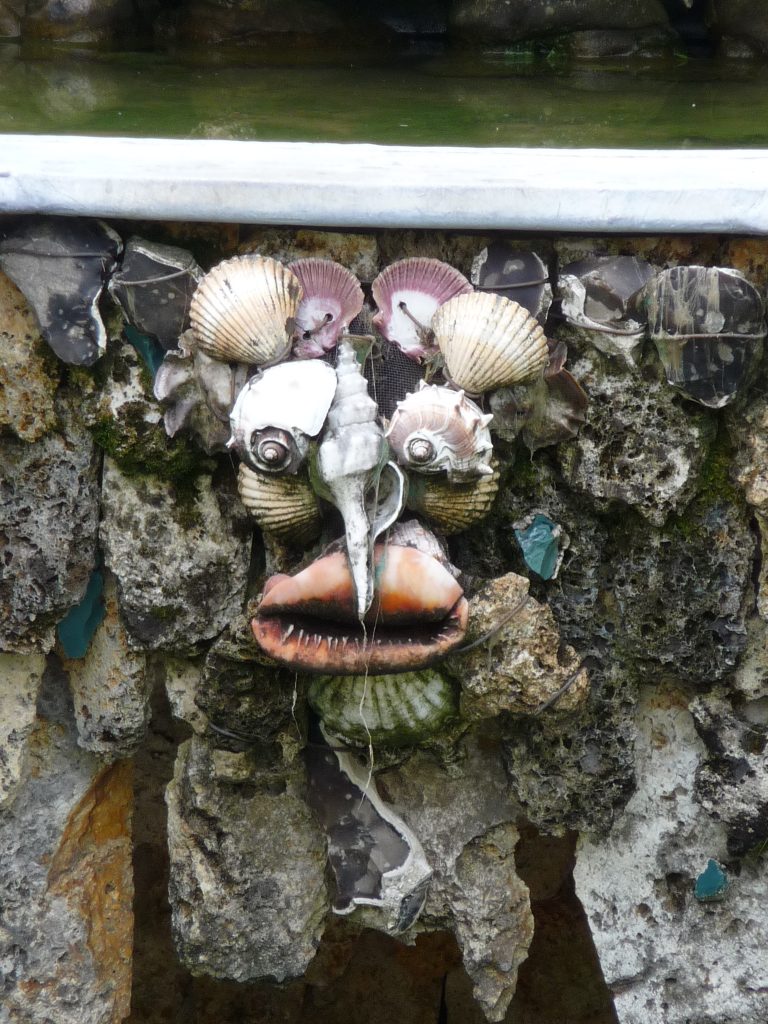 The shell faces embedded into the water fountains look like South Pacific islanders.

After you make your back up the hill to the château, visit the WC and the gift shop, it’s time to stroll to the train station. There’s no need to be in a rush because the frequency of trains makes it very convenient for returning to Paris. And since all the trains go into Paris, there’s no need to worry about getting on the right train or the wrong train. The short 35-minute ride gives you time to think about the majestic sights you just saw, to organize your digital photos, or maybe it’s just enough time for you to relax so you can head back out into town once you’re back home in Paris, the City of Light.

Stuart Gustafson is America’s International Travel Expert® who speaks on cruise ships, writes novels, writes a monthly newsletter, and loves everything about travel. Visit his website at www.stuartgustafson.com.